A study by the French Ministry of Energy Transition states that the biogas market in France continues to develop at a good pace. Injection capacities keep increasing as well as electricity production.

The report states that injection capacity of biomethane into the gas grid in France equals to 37 GWh/year and reaches a cumulative total capacity of 533 GWh/year. It also points out that the number of installations able to produce and inject biogas has more than doubled compared to the previous year. Biomethane production also rose by 13% in the last semester.

The Ministry of Energy Transition indicates that electricity production thanks to biomethane also continues to rise, with 519 plants able to produce electricity, representing a total generated power of 405 MW.The Grand Est, Hauts-de-France and Ile-de-France regions are the most active regions with most biogas plants, producing 54% of overall injections.

Around 300 biogas and biomethane projects are under way in France.

Nearly half the cost of linking a biomethane-producing facility to the gas grid will be taken on by the French state after the government announced increased support for the sector. In a statement, released 25 September, the country’s energy minister, Nicolas Hulot, said 40% of the total cost of connecting plants to the gas grid would now be met by the government.

However, the support will depend on the size of the project, explained Hulot. He added the 40% total would fall depending on the output of the biogas installation. This move aims to “encourage” the deployment of “small and medium” biomethane production plants, although precisely how the scale would slide was not clear from the statement.

Overall, the support aims “to allow a more balanced renewable-energy deployment” with a particular focus on rural areas, which are often “far away” from gas networks.

According to Hulot, up to now the costs related to connecting biogas plants to the gas network were entirely borne by the producers, which could make it “impossible” projects in rural areas, where the biomethane was too far from the gas network. gas.

Hulot said: “Our aim is to make biogas production accessible to all those who want to engage in the sector, including in the territories furthest from the connection networks. “Everyone must be able to participate in the development of renewable energies, and the development of a circular economy, with the [anaerobic digestion] of locally produced waste.”

France hopes backing biogas growth will support its bids to be carbon neutral by 2050. The country is increasingly backing both biogas and biomass and handed out generous 20-year subsidies in March this year.

The European Biogas Association (EBA) hosted a biomethane workshop in Amsterdam on 5 December, held in the framework of BIOSURF.

Speakers presented the biomethane industry developments in Europe, with a special attention to the Netherlands, to 40 participants.

Gerd van de Logt (GGNL), presented the prospects for further development of production and use of biomethane in the Netherlands.

Marco Middelkoop and Daniel Pol (Vertogas) made a presentation on the topic of issuing biomethane certificates in the Netherlands to support market development.

Finally, Martina Conton (EBA) and Attila Kovacs (EBA), focused on the proposal by the European Commission on the revision of the Renewable Energy Directive, and on ERGaR – the tool for the administration of cross-border biomethane movements through the European natural gas network.

All presentations are available here.

Brussels, 28 November – The final conference of BIOSURF and Bin2Grid, two EU-funded projects aimed at increasing the production and use of biomethane in Europe, took place on 24 November in Brussels. Speakers from both initiatives presented their main achievements from the last three years.

The projects have promoted the collection of waste materials and the development of grid injection of biomethane in order to create an “embryonic” European biomethane market and encourage its use as a transport fuel. Stefano Proietti from ISINNOVA, coordinator of the BIOSURF project, and Attila Kovacs from the European Biogas Association (EBA), presented the actions taken to kick-start a cross-border trade of biomethane within European countries. To achieve this goal, BIOSURF produced comprehensive guidelines to establish national biomethane registries, together with the establishment of the European Renewable Gas Registry (ERGaR) to foster cooperation among biomethane national registries. ERGaR will continue its activities beyond the end of the project, aiming to become the Europe-wide recognised organisation for administering mass balancing volumes of biomethane virtually distributed along the European natural gas network.

Lorenzo Maggioni from Consorzio Italiano Biogas (CIB) showcased the creation of an embryonic European biomethane market, providing the example of Italian, Austrian and French partners of BIOSURF that signed a Memorandum of Understanding aimed at defining conditions and rules to exchange biomethane Guarantees of Origin. This initiative is a first step for the exchange of biomethane between different Member States, and should be replicated in other countries to further develop the biomethane market.

The conference was closed with a series of policy recommendations, followed by a panel discussion of experts. Jan Stambasky, President of EBA, highlighted the need to recognise the domestic natural gas network of each Member State as a single logistical facility as well as the necessity for each European country to create a national biomethane registry, and stressed that preferential access to the natural gas grid should be provided to biomethane in every Member State.

The panel confirmed the great potential of biomethane in decarbonising Europe and reducing energy imports, and foresees an increase in production and usage in transport and heating and cooling thanks to a growing generation stemming from the power-to-methane technology. Project’s representatives agreed that further action is required to take full advantage of this positive trend, hence intending to pave the way for a future project.

All presentations are available here:
——–
BIOSURF: The objective of BIOSURF (BIOmethane as SUstainable and Renewable Fuel) is to increase the production and use of biomethane (from animal waste, other waste materials and sustainable biomass), for grid injection and as transport fuel. It consists of 11 partners from 7 countries. More information at www.biosurf.eu
–
Bin2Grid: The goal of Bin2Grid is to promote segregated collection of food waste as energy source, conversion to biogas, and its upgrading to biomethane and utilisation in associated network of filling stations, addressing environmental protection and production of renewable energy at the same time. It involved sustainable management of food waste in four cities: Malaga, Paris, Skopje and Zagreb. More information at www.bin2grid.eu
–
Both are EU-funded projects under the Horizon 2020 research and innovation programme. 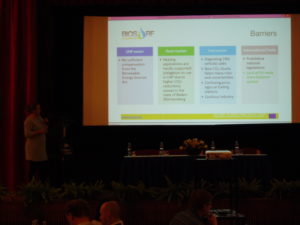 On 6th October 2017 the workshop of the BIOSURF project was held in Trebon, Czech Republic, within traditional national biogas conference with approximately 200 participants, covering the key players as well as public authorities from the Czech network and BIOSURF partners from Austria and Hungary.

The workshop was opened by Franz Kirchmeyr (Kompost & Biogas Verband Österreich), who welcomed the participants and showed a detailed overview on biogas and biomethane industry in Austria with a focus on the future development with no subsidies for electricity production.

Lada Uskobova (on behalf of Frank Hofmann, Fachverband Biogas e.V.) provided a detailed overview on biogas and biomethane industry in Germany. After an introduction of the German Biogas Association and the look at the past and current stage in the biogas and biomethane sector in the country, the main barriers, drivers and perspectives for development were presented as well as an outlook into the next future of the field.

Balázs Kakuk (University of Szeged) (on behalf of Kornel L. Kovacs, Hungarian Biogas Association) introduced the participants to the current biogas and biomethane sector development in Hungary, focusing on current problems and possible options for further development. At the end of the presentation Mr. Kakuk also highligted the collaboration and dissemination activities both at national and international level.

And the last contribution of the workshop has been given by Jan Stambasky (EBA), who highlighted the need of a solid system of cross-border trade with renewable gas as the current system does not fulfil the Renewable Energy Directive requirements and creates a danger of misuse and multiple sale of Certificates of Origin. Dr. Stambasky introduced ERGaR (European Renewable Gas Registry) to the participants and explained in detail its structure and benefits.

Please find here the agenda of the event, the presentations and the summary of the workshop.

You can find out more about which cookies we are using or switch them off in settings.

This website uses cookies so that we can provide you with the best user experience possible. Cookie information is stored in your browser and performs functions such as recognising you when you return to our website and helping our team to understand which sections of the website you find most interesting and useful.

Strictly Necessary Cookie should be enabled at all times so that we can save your preferences for cookie settings.

If you disable this cookie, we will not be able to save your preferences. This means that every time you visit this website you will need to enable or disable cookies again.

This website uses Google Analytics to collect anonymous information such as the number of visitors to the site, and the most popular pages.

Please enable Strictly Necessary Cookies first so that we can save your preferences!