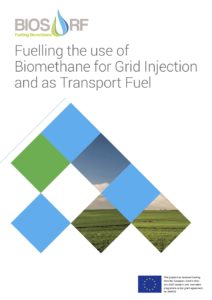 The final booklet is available for download in five languages: English, French, German, Hungarian and Italian. To download it, go to the Deliverables section of the website, click on “Dissemination, Exploitation and Communication”, and scroll down to the link for the final booklet.

A study by the French Ministry of Energy Transition states that the biogas market in France continues to develop at a good pace. Injection capacities keep increasing as well as electricity production.

The report states that injection capacity of biomethane into the gas grid in France equals to 37 GWh/year and reaches a cumulative total capacity of 533 GWh/year. It also points out that the number of installations able to produce and inject biogas has more than doubled compared to the previous year. Biomethane production also rose by 13% in the last semester.

The Ministry of Energy Transition indicates that electricity production thanks to biomethane also continues to rise, with 519 plants able to produce electricity, representing a total generated power of 405 MW.The Grand Est, Hauts-de-France and Ile-de-France regions are the most active regions with most biogas plants, producing 54% of overall injections.

Around 300 biogas and biomethane projects are under way in France.

Nearly half the cost of linking a biomethane-producing facility to the gas grid will be taken on by the French state after the government announced increased support for the sector. In a statement, released 25 September, the country’s energy minister, Nicolas Hulot, said 40% of the total cost of connecting plants to the gas grid would now be met by the government.

However, the support will depend on the size of the project, explained Hulot. He added the 40% total would fall depending on the output of the biogas installation. This move aims to “encourage” the deployment of “small and medium” biomethane production plants, although precisely how the scale would slide was not clear from the statement.

Overall, the support aims “to allow a more balanced renewable-energy deployment” with a particular focus on rural areas, which are often “far away” from gas networks.

According to Hulot, up to now the costs related to connecting biogas plants to the gas network were entirely borne by the producers, which could make it “impossible” projects in rural areas, where the biomethane was too far from the gas network. gas.

Hulot said: “Our aim is to make biogas production accessible to all those who want to engage in the sector, including in the territories furthest from the connection networks. “Everyone must be able to participate in the development of renewable energies, and the development of a circular economy, with the [anaerobic digestion] of locally produced waste.”

France hopes backing biogas growth will support its bids to be carbon neutral by 2050. The country is increasingly backing both biogas and biomass and handed out generous 20-year subsidies in March this year.

The last UK activity under the Biosurf project was a conference on “Biomethane as a Transport Fuel”, held on 14th December.  It was hosted at law firm Eversheds Sutherlands in London, and attended by 60 delegates.  The following themes were covered; the environmental benefits, experience of haulage fleet operators, the state of play with the roll out of filling stations, gas-fuelled GHV manufacturing issues, the availability of biomethane now and into the future, the best end uses for biomethane, the RTFC market and sustainability requirements.

The audience was engaged and questions were coming thick and fast, right until the moment the conference concluded, and then continued over a glass of wine.

In summing up the event, Gaynor Hartnell said the following;

“It’s primarily in heavy goods vehicles that the real interest lies in the UK, and decarbonising this sector gives a real bang for the buck, given the disproportionate amount of miles and emissions it accounts for.

Developments are happening very fast, and driven by an increasing number of pioneers such as the John Lewis partnership.  For these players the sustainability credentials are important and the focus is on biomethane, but even running on fossil gas GHG savings are achieved as well as a host of other benefits (NOx, NO2, particulates and noise reductions).

So industry is driving the infrastructure change, and it can be rapid, it’s not disruptive and with the average turnover of HGVs, it does not lead to technological lock-in.  Once gas is injected into the network it is academic which end use the gas is assigned to, unless it leads to infrastructure change.

We’ve clearly got to take some important players along with us, if the subject is to be done justice in DfT’s Road to Zero publication, and the REA will look to engage with the Committee on Climate Change and DfT in the forthcoming weeks.

It’s likely biomethane producers are going to be paying much more interest to the RTFO, given the current challenges of the Renewable Heat Incentive.  Biomethane from gasification is going to be given a particular boost as, possibly, will power-to-gas – depending on its status as a development fuel or not.

From my position as Head of Renewable Transport Fuels for the REA, the most pressing issue at present is getting the new RTFO onto the statute book.  If it’s not to become operational by mid April 2018 it becomes increasingly questionable when it will be implemented and some of the industry cannot afford to wait.

We’ve covered some operational issues relevant to biomethane operators claiming Renewable Transport Obligation Certificates, but it’s clear that the RTFO is complex and fundamentally different from the other financial instruments the sector is used to.  Coming to this cold, there is likely to be much that companies will not understand, and I feel the REA should run some teach-in sessions for both its biogas and its gasification and pyrolysis groups.  All in all there is much work to do for this emerging and very exciting sector”.

From the 22nd – 23rd of January 2018, the 15th International Conference on Renewable Mobility “Fuels of the Future” takes place in Berlin.

What role will the combustion engine play in mobility in the future? The increasing diversification of drive technologies and the development and market introduction of alternative fuels offer major challenges for the industry, but also economic opportunities. The programme of the conference in 2018 focuses on these topics, as well as the development and market opportunities of new drive technologies.

The international conference on “Fuels of the Future” represents the leading European forum on the issue of future mobility, particularly with its focus on alternative fuels and drive technologies.

The 15th International Conference on Renewable Mobility will offer a broad spectrum of presentations on the latest technological developments in the transport industry. The full conference programme, how to register and information for potential exhibitors and sponsors can be found here.

You can find out more about which cookies we are using or switch them off in settings.

This website uses cookies so that we can provide you with the best user experience possible. Cookie information is stored in your browser and performs functions such as recognising you when you return to our website and helping our team to understand which sections of the website you find most interesting and useful.

Strictly Necessary Cookie should be enabled at all times so that we can save your preferences for cookie settings.

If you disable this cookie, we will not be able to save your preferences. This means that every time you visit this website you will need to enable or disable cookies again.

This website uses Google Analytics to collect anonymous information such as the number of visitors to the site, and the most popular pages.

Please enable Strictly Necessary Cookies first so that we can save your preferences!